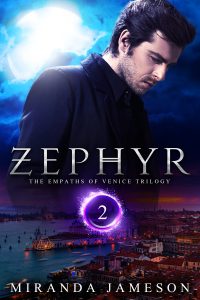 Zephyr catapulted across the dojo, hit the floor, and slid into the wall. Damn, he should have anticipated Pryams’s reverse kick. Flipping back onto his feet, he faced his opponent and winced as pain shot down his right leg.

“Had enough yet? You’re somewhat lacking in the concentration and focus department today, kid.”

Zephyr suppressed a smile. Would Pryam still call him ‘kid’ two hundred years from now? Probably, but he was okay with that. Pryam’s casual teasing made a welcome change from the rigid formality of his everyday life. “My apologies, sensei, my mind is elsewhere this evening.” He corrected his stance. “Shall we continue?”

Pryam frowned and bent into a formal bow. “No, we’ve been at it for two hours, Zeph. I know you’re trying to distract yourself, but I think we’ve trained enough for today. I sense the hour is approaching.”

Zephyr returned Pryam’s bow, and reaching out with his senses, caught the heightened tension and anxiety permeating the house and its inhabitants. Everyone was on edge. Waiting. The old order was coming to an end and the future balanced on a knife-edge. Sucking in a calming breath, he murmured, “I’m counting on you, Pryam.”

A curt nod. “I’ve got your back. Always have, always will.” Pryam lowered his voice, a wise precaution, but unnecessary. The dojo was one of the few rooms in the house free from listening devices. “It’s all in hand. We’ll secure the study the second I sense his spirit leave. No one will enter but you. Not long to go, Zeph. You’ll be free before the hour of Anatole.”

That was fitting. Zephyr towelled his sweat-soaked hair. Anatole – sunrise, the hour of new beginnings. He’d waited one hundred and ninety-eight years for this day. There’d been numerous opportunities to bring it about by force, but there were some sins he refused to commit. Now, the gods had taken the matter out of his hands.

A peremptory knock and the dojo door flew open. Pryam shot Zephyr a last sharp glance and headed for the shower. Tossing the towel into the laundry bin, Zephyr faced Hector, his father’s half-brother. The man was immaculately turned out as usual. Not a silver hair lay out of place and no insolent specks dared mar his bespoke Saville Row suit.

“Your father’s soul prepares to leave.”

Hector raised his eyebrows and waved a disdainful hand at Zephyr’s gi. “Surely you intend to change into something more suitable.”

Zephyr turned to the mirrored wall and raked his hair into place with his fingers. Reaching out, he grabbed the envelope he’d carried around for days, stashed it into the front of his karate gi, and then tightened his black belt to secure it.

“I don’t believe winged Thanatos is prepared to wait around while I get showered and changed. Death waits for no man – or Empath, as I’m sure you already know.” Striding barefoot across the dojo, Zephyr pushed past his uncle and ran up the stairs of the Upper East Side townhouse.

He’d been unnecessarily flippant. It was best to rein that in. The last thing he wanted was to alert Hector that all was not as he imagined. Entering his father’s bedroom, Zephyr crossed to the bed and drew in a shuddering breath, his chest constricting with unexpected pity and shock. For the last four hundred years, the man lying in the bed had controlled the world’s most secret and powerful financial organisation, yet now, he looked fragile and shrunken. Death was the great leveller and all beings on earth arrived at this moment, though some took a little longer getting there.

After eight hundred and twenty-three summers, Orion of the House of Ploutos was finally facing a foe who couldn’t be blackmailed, bought-off or eliminated. Thanatos, the god of death, was coming to take his soul, though mighty Thanatos might be disappointed because the man lying between those linen sheets had no soul and no heart.

Money and power, Zephyr, make the world go round. All else is worthless distraction. Do not ever forget that.

How tragic that those words were the only ones to pop into a son’s head at this most poignant of moments. No words of paternal love or affection, though in the last twelve decades, there had been words of grudging respect. A reluctant acknowledgement that there was more than one route to success. That honour and integrity had a place in the world of business and finance. Zephyr shut his eyes briefly to calm his mind and listened to his father’s breath rattle. Casting a glance at his uncle, he began to recite the prayer for the dying. The Ancient Greek words of this lilting incantation were a son’s final duty to his father. He’d always been a dutiful son. Not that he’d had a choice.

Zephyr continued, disconnected from the measured cadence of his own voice. He should feel something. Some spark of sorrow or regret, or some stirring of a treasured childhood memory, but there was nothing at all. Not even anticipation or triumph. He’d schooled his emotions so well, he sometimes wondered if he was capable of feeling anything anymore. His heart rebelled at the possibility he had finally become like the man dying in the bed.

As Zephyr uttered the final words, his father took a rasping breath and let it out long and slow. His eyes, grey like dirty snow, opened. Zephyr gasped, sensing his father’s unguarded emotions for the first time in years. Fear and rage – his aura grew murky with them. Orion wasn’t going peacefully. Perhaps wicked people did not deserve good deaths.

Zephyr shot a glance at Hector. “Open the windows to ease the passing of his soul into the other realm.”

He knew Hector didn’t believe such things anymore, but amongst the Empath race, this was the way things had been done for millennia. Rituals were comforting. Which was why people followed them.

Hector drew back the heavy curtains and threw open the windows to the New York dawn where April ushered in a balmy spring. Spring brought new beginnings – there was a time for everything.

“My brother is fading.” Hector sounded as if he could scarcely believe such a thing was possible for the mighty Orion.

Orion was fading. Literally. Zephyr watched his father’s aura fade to grey until, with a final flutter, it whipped into the air and flew out of the open window. He shivered, his senses detecting the sudden absence. Death had taken Orion of the House of Ploutos. Zephyr shut his eyes. Did that faint hollowness in the centre of his chest signify grief…relief…or was it nothing? Opening his eyes, he studied his father’s body, noting how, in the absence of its life-force, it resembled nothing more than an empty shell.

Hector covered his eyes and gasped out a blessing. What a damned hypocrite. Zephyr waited, sensing his uncle’s heightened excitement behind the phony display of grief. One, two, three, here it came.

“The Skotadi mourns the passing of its leader. I will endeavour to be faithful to your dear father’s legacy.” Hector reached for his half-brother’s hand to pull the signet ring from his little finger.

Hector straightened up; outrage stamped on his features. “Your father willed that I should take over the Consortium.”

My god, the man had no shame. Zephyr drew out the thick envelope he’d tucked into his gi, pulled out the document encrusted with red wax seals, and held it up. He’d hoped to avoid doing this at his father’s deathbed but needs must. “But he was outvoted by nine of our twelve members. Need I remind you about the Consortium’s democratic mandate? As you can see, this document names me, Zephyr of the House of Ploutos, as the new leader of the Skotadi Consortium.”

Was that fear he saw? Yes, Hector’s aura shone dark with fear intertwined with red fury. The man had lost control; his shock leaked out and infused the room. “We’ll see about that! You will turn down the position and surrender it to me. Do not forget the dire consequences if you refuse to obey. Do you want that on your conscience?” Turning on his heel, Hector stormed out of the room.

Zephyr tucked the document away. True to form, Hector had reacted exactly as he’d anticipated. Murmuring the prayer for the dead, Zephyr placed coins on his father’s eyes, arranged his arms across his chest, and drew the sheet up to cover his face. Goodbye, I have learned much from you. Hurrying downstairs, he stowed away the memory of touching his father’s still-warm skin. He’d just had physical contact with his father for the first time in over two hundred and forty years. How tragic that Orion had never needed or welcomed the simple joy of embracing his own child.

Now for the final step. Zephyr knew where he’d find Hector. If Pryam had stuck to their plan, life was about to change for the better.

Zephyr is now available to pre-order on Amazon, and for a limited time you can get it at a heavy discount!